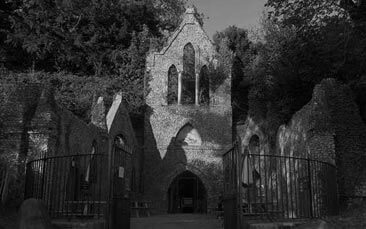 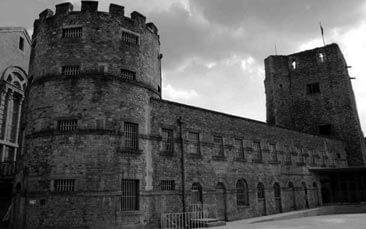 After a restless night of spectre searching, enjoy a relaxed Champagne Punt the next day! Find out more...

Oxford hen party ghost hunting is a fabulous way to inject some real supernatural thrills into your big weekend. If you're a fan of TV's Most Haunted or the bride-to-be is addicted to films like Paranormal Activity then this activity is perfect for your bunch of spectre-happy hens. Head into some of Oxford's spookiest locations and track down those pesky ghosts with EMF meters and more like real-life paranormal experts.

Our Oxford locations are some of the most haunted in the UK, steeped in their own bloody histories with stories of execution and occult affairs promising a chilling night of hen party ghost hunting.

We have two Oxford haunted hen night locations to choose from;

This location is by no means for the faint of heart, as even hardened paranormal investigators have been left shaken by the spectres of this ancient castle and it's incredibly creepy prison wing. It's said that the ghostly figure of the hanged woman Mary Bland stalks the mound on which she met her end in 1752, and reports of two sinister figures dressed in black have become alarmingly frequent over years of paranormal experimentation in this historic and torrid site.

Built by the bloody Norman baron Robert D'Oyly the elder in 1071, Oxford Castle is steeped in a dark, mysterious past. Designed to dominate Oxford in the 12th century, the castle is bold and oppressive with a moody atmosphere that even people working there today struggle to shake off.

There's only one way into the Hellfire Caves, and only one way out. Sir Francis Dashwood constructed this labyrinthine network of caves in the 1740s to supply the chalk for the West Wycombe - High Wycombe road. Although Dashwood soon stooped below his well-mannered intentions to use his caves for his own nefarious means. Along with his infamous 'Hellfire Club', he participated in black magic, dabbled with the occult and even performed some satanic rituals in these darkened depths.

Paranormal investigators are intrigued, but also wary of these caves, believing that they aren't as abandoned as some might think. Unexplained goings-on include the sounds of ritualistic chanting from the inner temple, guests being touched and appearances from the wandering figure of a betrothed girl, never to be wed.

For ghostly goings on and spookily good times then give us a call and book your own Oxford haunted hen party... if you think you can handle it?!?