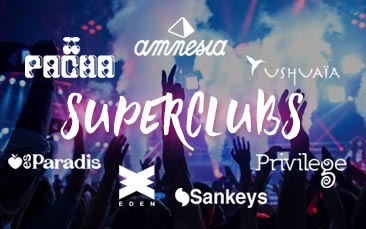 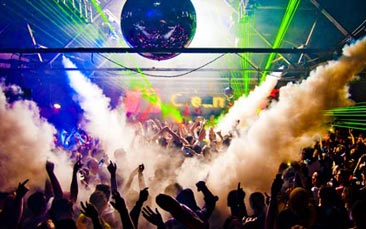 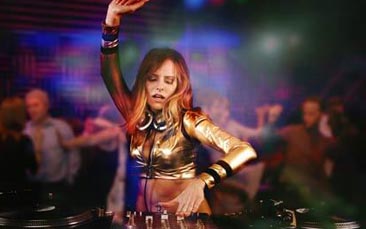 Get the bride's night off to the perfect start with a Strip Dinner. Read more...

More About Hen Do superclub entry

Ibiza, the greatest party island ever and home to some of the biggest and best clubs on the planet! If you've come to live, laugh and dance then these are the places to do it. During peak times of the year getting inside can be tough but GoHen will help you get into the best parties in town.

We have all the best superclubs for you to choose from (please note, some clubs will be closed on specific dates, our team have a full list of opening times available on request). As for closing times, this is Ibiza, no one goes to sleep before breakfast.

With five different rooms linked by stairs, doors and "secret" corridors, Pacha Ibiza is the place to be seen. Live performances, pool parties, roof terrace, five rooms, Pacha is one of the most famous names in dance music history and first opened its door back in 1973. Since then names like David Guetta, Fatboy Slim and Swedish House Mafia have added to its legend.

THIS is how to party, under the stars, warm island breeze, listening to some of the top DJ's in the world. There are two pools, large stage, plus VIP extras available for discerning hens. You can even have your own private pool.

Did somebody say 'foam party'? Amnesia is perfect for hen who are funky enough to party and young enough to still love the idea of 'bubbles'! In fact, Paris Hilton has been the hostess for the Foam & Diamonds' nights in previous summers. This is one of the original Ibiza party venues and really does epitomise everything the island is about.

A Guinness World Record holder for being the 'Biggest Club in the World' and its fantastic staff and DJ's would argue that's it's also the best club in the world and we're not about to argue. Privilege can hold up to 10,000 guests. Originally named Ku, it's one of Ibiza's original clubs and has played a huge part in the history of dance music. The roof is 25 metres high, a cathedral to music and one of the greatest venues of all time.

Three unique rooms dedicated to the life force that is dance. Sankeys is for serious beat fans and likes to do things a little bit differently. The kind of place you'll hit the dance floor and next thing you know it's light outside and you're on your way to breakfast. Amazing nights and incredible memories.

Have we saved the best until last? Es Paradis was there when 'disco' was just a puppy. This phenomenal club dates back to 1975 and really was there at the dawn of modern dance music. Its name, 'Es Paradis' means 'Paradise'. With its white design, interior gardens, billowing ceilings, you really have never seen a club like this before.

We work with 1000s of suppliers across the UK & Europe so prices, availability, photos and specifics on our superclub entry activity may vary depending on your preferred location and dates.

Welcome to the greatest party island on the planet!