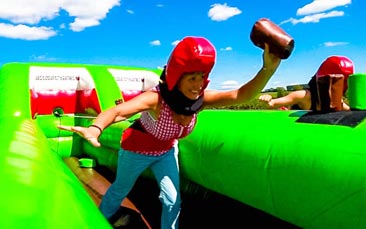 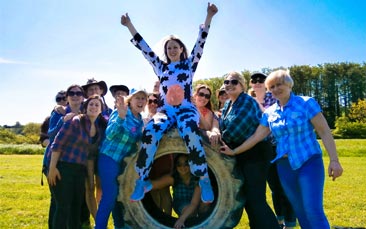 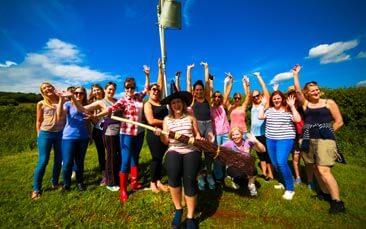 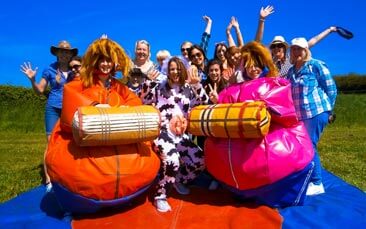 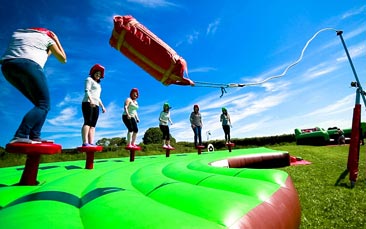 All year round. Indoor venue between Nov-Feb

If you and the girls are looking for an epic South West experience, then look no further than these "gurt lush" Somerset Games. Utterly bonkers, brilliantly fun, uber-competitive, and unashamedly Somerset - this isn't your average hen do activity! For those of you yet to have heard of the legendary hen party Somerset Games, here's the lowdown:

You'll battle it out in a giant game show packed with massive inflatable obstacles, outrageous costumes, and wickedly funny referees/farmers. It's a perfect (if slightly bizarre) way to break the ice and bust the bride's wedding planning stress. But, be warned: it's going to get messy...

The Cider Run - Tied to a bungee rope you will run along the inflatable cider course to place a plastic cider glass as far along the runway as possible before the bungee rope pulls you backwards!

Pitchfork Duel - Battle against fellow hens with inflatable pitchforks with the aim to topple your opponent from their podium!

West Country Wipeout! - A pedal-powered sweeper arm that will knock the hens off their podiums in a last hen standing game.

Vicky Pollard Handbags - Two of the hen group will be pinned against each other with the aim to hit your opponent with a handbag while wearing big inflatable costumes!

Welly Wanging - Each of you will take it in turns to throw a wellington boot into a series of targets!

Drunk Pub Skittles- Time to try your luck at the alley! Take to the wooden alley and eye up the target of wooden skittles - sounds easy when you're not dizzy drunk, but try spinning around a pole first!

Mangold Dangling - Was the last game daft enough for you? Well, you haven't seen anything until you've played mangold dangling. Bar skittles with humans on cider kegs!

Farmer's Shower - This one is, of course, optional - The hen will be placed in the 'Tractor Seat of Truth' and will be asked a selection of questions thought up by the hen group on the day. The end result is up to you... does the dirty ditch water in the bucket above descend or is the hen safe?

The Somerset Challenge really is the most fun you can have with your wellies on!

Indoor venue between Nov-Feb
Please note: Outdoors in the summer, the event moves inside in the winter months.

"Amazing!!! Couldn't fault at all"

"Very good, had a great time!"

"Brilliant activity, lots of fun and filled the time well. We haven't laughed so much in ages!"

"Our instructor made the Somerset challenge fun, everyone in our group had a good time!"

"Fantastic time, such a laugh even in the rain. Everyone loved this no matter their age and our host was brilliant. Would definitely do this again."

"This was the highlight of our weekend and we all enjoyed it so much!"

"Very good fun and all enjoyed themselves."

"So much fun! We all absolutely loved it."

"This was exactly what I hoped it would be and more. So much fun and would definitely recommend it!"

"Apart from us being very unfit it was fantastic. Our instructor was a great host and we laughed non-stop. It was very well organised."

Please Note: We work with 1000s of suppliers across the UK & Europe so prices, availability, photos and specifics on our somerset challenge activity may vary depending on your preferred location and dates.