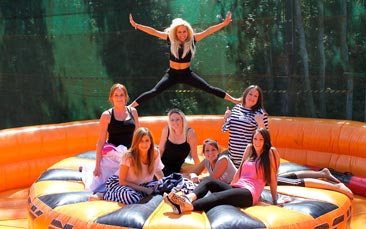 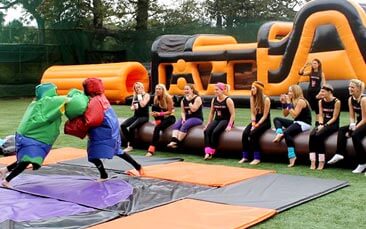 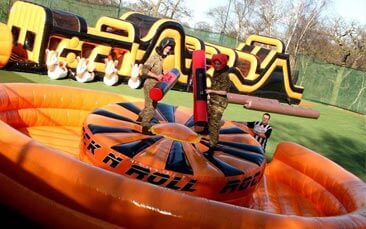 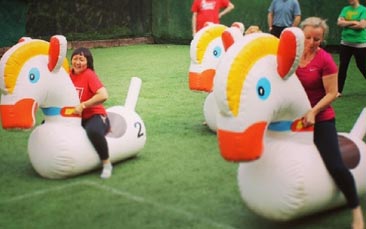 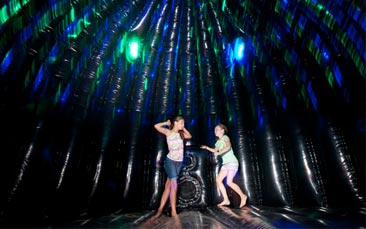 If you're looking for something totally unique for your best mate's Birmingham hen party, then look no further!

Our Inflatable Games activity is fun, fast-paced, and just the perfect amount of chaos.

Going head-to-head over a number of inflatable games, you'll jump, dive and bounce your way to victory.

Yes, if you want to avoid a boring, snooze-fest of a weekend, be sure to add in this top-tier activity.

(Games may differ on the day!)

Will you be able to conquer the 45-metre inflatable assault course? Yes, this is a true test of your bouncing abilities as you race against one another. Let's GO!

First of all, both teams need to open their legs and straddle the wobbly sausage. Of course, before any racing can begin, you're now going to have five minutes of shocking innuendo. Still, it's not every day you get to ride a six-metre frankfurter...

Test your nerves of steel on a rotating platform where you'll do battle with a fellow hen. This is a hilarious one-on-one gladiator battle that'll really get the laughter in full flow.

This is a serious blast from the past as you go back to your carefree days of bouncing on the back of an inflatable space hopper. It's a classic race that's sure to result in plenty of nostalgia.

Kitted out in huge inflatable sumo costumes, you'll attempt to wrestle your way to victory in this hilarious one vs. one battle. Who will be crowned the Sumo Queen?

This is the perfect addition to the bride's big Birmingham weekend and a great way to break the ice.

Once the ice is well and truly smashed and you've conquered the inflatable games, we reckon a boozy bottomless brunch is in order. You'll definitely have earned it!

"Brilliant day, was the best part of the weekend"

"We all had such fun, we felt like big kids again."

"The instructors were brilliant. They were very funny and friendly and helped us all when we got abit stuck"

"The day was amazing, the hen loved it! And the staff were so much fun!"

"Brilliant, everyone enjoyed it, very safe. Have recommended it to someone already!"