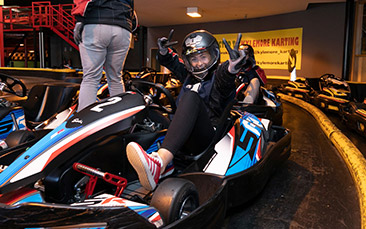 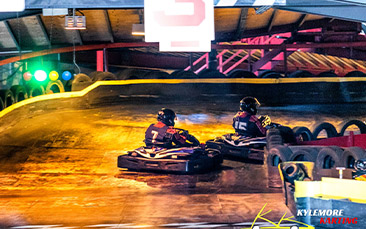 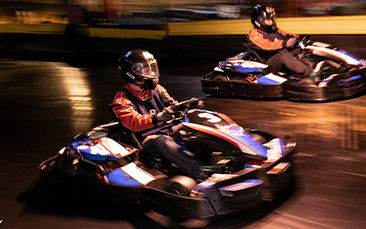 Get behind the wheel and gear yourselves up for some kick-ass, fast-paced action in Ireland's brilliant party capital! Find out who are the real speed demons and who drives like an old woman without her glasses as you and the girls battle it out in the hilariously fun, high-octane, Dublin Indoor Go Karting session.

You and the girls will put your driving skills to the ultimate test as you go wheel-to-wheel to crown the driving queen amongst you. Ireland's largest indoor karting arena is the perfect place for the bride-to-be to burn off some steam and satisfy her thrills and spills.

Your instructors will get you all kitted up in your racing gear, and once you've taken at least one squad selfie, it's time to hit the tracks. You'll choose from three different competitions:

You'll receive six laps practice to get used to the karts and track before letting the competition commence! You'll take part in a twenty-lap qualifying heat, and based on your time, you'll be placed into graded finals. The finals are 15 laps long.

Drivers get six practice laps, followed by four qualifying heats each, starting at a different position on the grid. Points are awarded for the finishing positions in each heat, and then you'll proceed to the finals (i.e. the top set through to the A final, next set to B etc.).

In the Grand Prix, you'll also get six practice laps to warm up for the qualifying heats, however, instead of the graded finals, you'll take on the knockout stages. There are 4 quarter-finals, with the top 10 making the semi-finals and the top 6 reaching the 15-lap grand finale. But only one hen can be crowned champion!

Please Note: We work with 1000s of suppliers across the UK & Europe so prices, availability, photos and specifics on our indoor go karting activity may vary depending on your preferred location and dates.