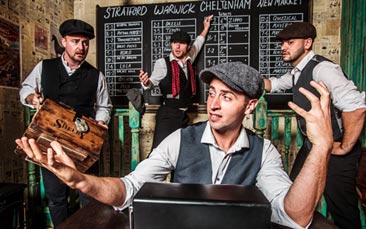 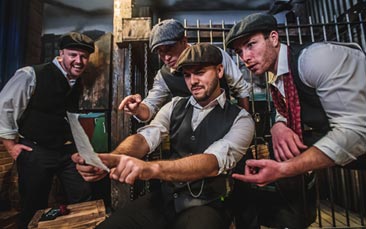 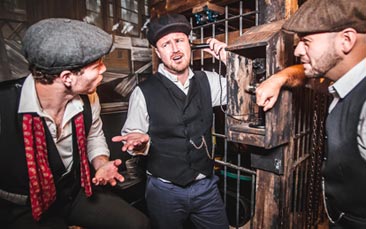 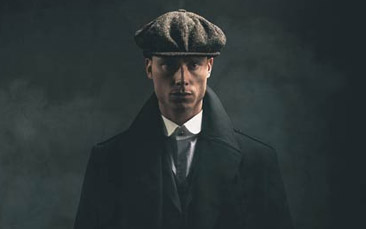 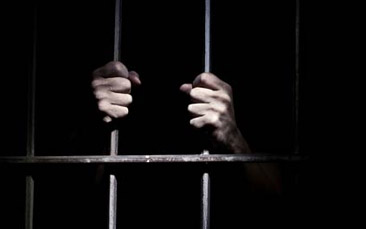 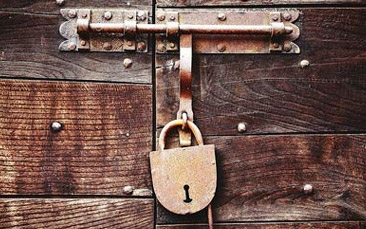 Just like the Shelbys, you've been swaggering around, taking the city by storm on your big Birmingham hen weekend.

However, also like the Shelby's, you've found yourself if a bit of a sticky situation. You've entered an Escape Game and have just sixty minutes to bust out alive.

The top dogs - Tommy, Polly, Arthur and John - have gone to London to take care of business, leaving the bookies unattended and vulnerable to those looking to mess with the Peaky Blinders. Obviously, Thomas isn't stupid, he already thought of this and arranged for you to protect it. You have just sixty minutes to find anything which could be used to incriminate the Shelby family and destroy it before Major Cambell's men arrive on the scene. Is Tommy right to place his trust in you? Are you ready to join one of the most powerful gangs of all time? There's only one way to find out!

Alfie Solomons wants something from Tommy Shelby (give the guy a break!), and he's asked him to go and see him at his 'Bakery' in Camden. But the Peaky Blinders have their wits about them, and they suspect that London's crime boss has got something up his sleeve. They're sending you to the 'Big Smoke' to see if you can suss out what's going on, and sniff out any suspicious activity. You must come up with a strategy, infiltrate Alfie's gang, and find out just what it is he wants.

Sure, Thomas Shelby is the cunning, criminal alpha, but you know what they say: behind every great man is a woman rolling her eyes. So, show them Peaky boys how it's done.

Book your escape room today…by order of the Peaky Blinders!

Once you've conquered the Escape Room, why not party like a Peaky Blinders gal as you and the hens indulge in a spot of Champagne tasting.

Please Note: We work with 1000s of suppliers across the UK & Europe so prices, availability, photos and specifics on our Peaky Blinders Escape Game activity may vary depending on your preferred location and dates.