One of your closest friends is getting married and you've been asked to be part of the bride squad in the form of a bridesmaid. Buzzing doesn't even come close to describing how you feel right now! But just because you aren't the maid of honour it doesn't mean you can kick back, relax and enjoy it all guilt free, you've got to muck in with the planning, too. Here at GoHen, we've come up with the definitive bridesmaid duties checklist, so you know exactly what's expected of you.

Help pick out the dresses, though you may have to wear what the bride wants! Just remember it's her big day. You may also be expected to pay for your own dress. Bare this in mind in advance before accepting the honour of being a bridesmaid!

The bride-to-be may just want a couple of close people with her (mother, sister, maid of honour), but if she does want you there, be enthusiastic and helpful. Let her know how stunning she looks and reserve overly negative criticism. 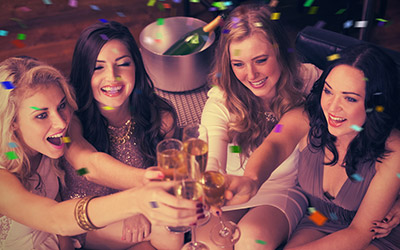 Though this will mostly fall on the maid of honour to arrange, be prepared to chip in with ideas and help out by bringing some great party games. Most importantly, be your fun, excitable self. Nothing can kill the mood at a hen party more than someone who seems like they don't want to be there. Read more on How To Plan A Hen Do.

Ok, at certain points the nearly-wed may turn into a bit of a 'Bridezilla' and you may feel the urge to ignore her irrational WhatsApp messages but remember she's under a lot of stress. Just keep reassuring her and be an outlet for her to vent to. Also, stock up on wine!

Don't just flake out on rehearsals, they arrange them for a reason. If people don't know what they're doing on the big day it can turn into one humungous, unorganised mess. Put the time and the effort in that you would want them to put in for your wedding.

Decide between the girls and the maid of honour who will look after the emergency bridal kit. Make sure you have all the little things needed to patch up something if it goes wrong. We're talking safety pins, we're talking make-up, we're talking sewing gear, we're talking tissues, etc.

8 Get the Party Started

Your time to shine! People can be timid at the start of receptions, before the alcohol has penetrated their bloodstreams, so you and the girls are going to need to kick things into gear. Make sure everyone's having fun and prepare to hit the dancefloor after the bride and groom's first dance.

9 Look After the Gifts

Decide between you who will be in charge of the gifts when the bride and groom quickly whizz off on their honeymoon. "Definitely not Lucy, she'd lose her head if it wasn't attached!" Be sure to pick someone organised and reliable.

Yes, you may have a banging headache and, yes, you may detest tidying up, but the bride and groom have just had the most important day of their lives and are off sunning themselves somewhere hot, so someone has to do it. Have a hearty breakfast, pop on some tunes and get cracking.

And that's the lot! Not too much to deal with, just remember the key points: be a friend, be organised and be as helpful as you'd want the bridesmaids to be at your wedding.