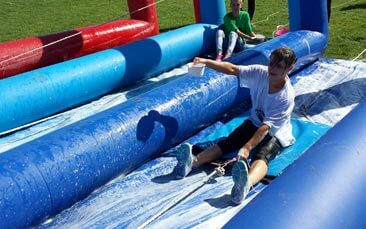 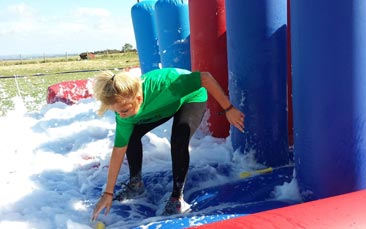 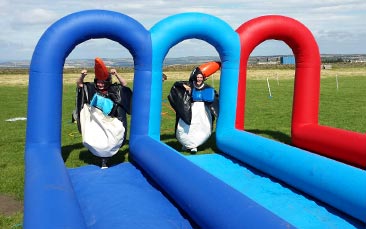 If you've ever watched a giant TV game show and thought "I'd love to do that!" then now's your chance. Like a hen party mashup of shows such as Total Wipeout, Ninja Warrior and It's a Knockout, this inflatable fun on a grand scale.

Split into teams you'll be competing over a number of massive and messy obstacles in an afternoon which is sure to have all the hens laughing from the start to the glorious and victorious finale.

* Games are subject change due to seasons and weather.

"The staff were amazing so funny and gave clear instructions. The day was fantastic."

"Highlight of the weekend!"

"Everyone absolutely loved doing this we all had a great time!"

"These inflatable games were more fun than I thought they were going to be, a couple of the girls were way out of their comfort zones doing these but even they had a fab time! The instructor was so funny and made us all feel very at ease (even though we did all get soaking wet)!"

"Better than expected, didn't realise there was so much water involved, everyone got soaked but thoroughly enjoyed it! Even girls that were nervous about doing something so physical really enjoyed themselves!"

Jessica Quinn | Newcastle
"I've never had so much fun"

"The games were just what everyone needed! I've never had so much fun and didn't stop laughing from start to finish. Excellent day and full of fun, would definitely recommend it!"