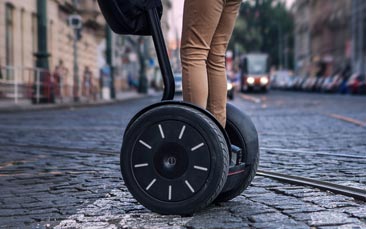 Segways and necessary equipment are included.

Please let us know in advance if you have any specific dietary requirements. May be cancelled in bad weather conditions.

So you and the girls have decided to take your hen party on an awesome European tour, right on ladies! There's so much to see on the continent, and Madrid might just be one of the most beautiful cities out here. But there is one teeny, tiny issue; you've no idea where anything is. Don't worry hens, we've got you sorted. While you could take an informative city bus tour to learn the roads, we know on your big weekend, you want something a little bit special.

On your Madrid hen party segway tour you'll see the best that the Spanish capital has to offer as well as having a hilarious and unique driving experience as you go. This really is one of Madrid's best tours, as, after a bit of training on your Segway HT, you'll embark on a 3-hour exploration of some of the best sights in the city centre.

The amazing locations you'll scoot past include:

You'll be able to enjoy some cool refreshments and some delicious tapas on route, giving you a chance to take a bit of a break and enjoy the stunning Spanish surroundings. On your Madrid segway tour you'll even have a digital photo service, so after the tour, you'll be able to have a giggle at hilarious photos of you riding the unusual segways!

"We were a little late as we struggled to find the meeting point, but our instructors were kind and patient. We got our full hour tour too. Instructors were fab!"

"Our favourite activity. Great instructor and nothing was too much trouble."

Please Note: We work with 1000s of suppliers across the UK & Europe so prices, availability, photos and specifics on our segway tour activity may vary depending on your preferred location and dates.