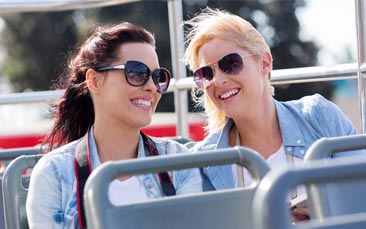 Dress for the weather.

Taking the girls on an open-air bus tour in Madrid is a great way to see and get around the city in large groups! You'll have a one day ticket, with the ability to hop on and hop off as many times as you'd like and access to the two main Madrid bus tours. Learn about the city in record time as you glide through its maze-like streets, stopping at the city's key sites as well as a few other notable gems.

With 2 routes and over 30 stops, you'll be sure to see everything this fabulous city could possibly have to offer. The buses run so frequently that you won't have to spend your whole day waiting around for the next bus - you wouldn't want to be reminded of rush hour woes in exotic Madrid, would you?

You can take your seats on your double-decker bus after being given an English audio guide to talk you through all the spectacular areas and sights you visit. You'll also be given a city map and discount voucher book for shops and restaurants, to help you when you're back on foot! It's also a great way to do some serious sightseeing with hens of all ages and levels of physical fitness.

You'll get to see all of the city's main sights, such as the Santiago Bernabeu Stadium, the Prado Museum and the Royal Palace while having a great time with the girls and soaking up some Spanish sun in the country's capital!

Please Note: We work with 1000s of suppliers across the UK & Europe so prices, availability, photos and specifics on our city bus tour activity may vary depending on your preferred location and dates.