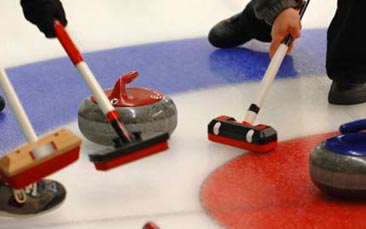 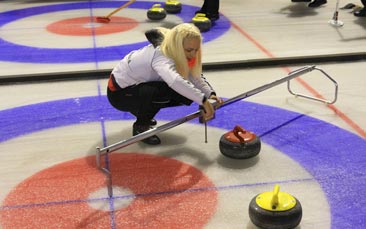 Sporty hens will love this fantastic hen party curling challenge which is perfect for any bride-to-be who is wickedly competitive (you know who you are!). For those if you that didn't come completely hooked to curling during the last Winter Olympics the best way to describe curling would be like bowling on ice... except you have to clean up as you go.

And you don't need to be able to ice skate, all the players wear ice grips on their feet so you can walk on the ice without slipping over.

The aim of the game is to "curl" specially polished and shaped giant granite stones over the ice. Two teams of four players take it in turns to launch their stones, the 'curler' who launches the stone can make the stone curve on route by causing the stone to spin on release. As the stone travels down to the target which is marked out on the ice, the other three team members can influence the direction and speed the stone travels at by 'sweeping' the ice ahead of the stone to make it smoother.

Sound easy? Well, it kind of is. Though it's one of those fantastic sports that anybody can play: being brilliant at it is a different matter entirely. Although it just so happens it's one of the few winter Olympic sports us Brits are bloomin' good at. Despite the event not being included for a number of years (1924-1994) and only becoming a women's event in 1998 it has been one of our most successful Winter Olympic sports having won two gold, one silver and one bronze and we've got good future medal prospects.

Of course, you could find you're a natural and it'll be you representing your country at the next time around? Although you need to start by claiming that first hen party curling victory against your fellow hens at what is a brilliant and hugely competitive event.

Please Note: We work with 1000s of suppliers across the UK & Europe so prices, availability, photos and specifics on our curling activity may vary depending on your preferred location and dates.