Everything from A to Z from GoHen, Weird & Wonderful 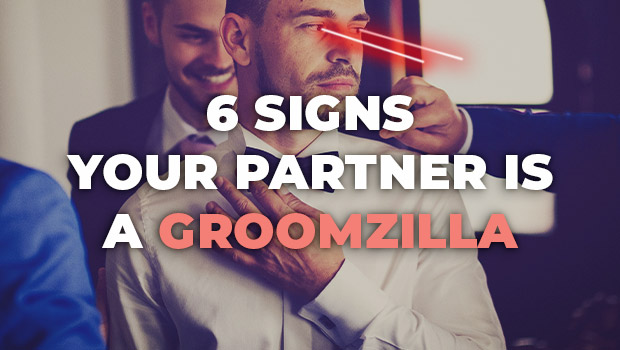 Now, we’re all familiar with the term Bridezilla, often it gets unreasonably banded about whenever any bride gets even slightly frustrated with anything wedding related. Newsflash: the caterers dropping out last-minute is a legit reason for wedding stress and doesn’t, repeat, doesn’t, make you a Bridezilla!

But what about the grooms?! How come they escape the blame? As more and more men are getting involved in the wedding planning process, the more documented cases of the grown men throwing hissy fits for not getting their way. Yes, ladies, we are witnessing the rise of a new marital monster: ‘Groomzilla’.

Don’t get us wrong, we’re pleased to see grooms taking a more hands-on approach, but inevitably, a few will go too far the other way and go full-on Groomzilla. So, here are a few tips and tricks on how to spot the signs and hopefully keep him calm before he goes nuclear.

This one is often pinned on the women wanting the ‘fairy-tale wedding’ experience: horse-drawn carriages, dove releases, archways carved from ivory and unicorn horns, but men aren’t averse to ridiculous, out-of-budget requests either.

A common one is arriving in an outlandish James Bond-styled car. Another is expensive suits. Extravagant venues. A whisky bar erected outside solely for the groomsmen. Getting Stevie Wonder performing ‘Hallelujah I love her so’ as you walk on down the aisle. The list goes on…

Set a budget and stick to it. Be prepared to compromise: if you won’t allow him to spend loads of money on a certain thing, you may also have to sacrifice some expensive purchases of your own. But don’t be afraid to tell him when he is being ridiculous.

Most people plan their wedding a year or two in advance and give little thought to whether it will clash with anything else. But hey, this is their big day, it’s irrelevant if anything clashes, nothing will take the attention off their special, once-in-a-lifetime moment.

Well, that was until Manchpool United got through to the final of the North-Western-Regional-Division-Milk-Cup Final against Barca Hove Albion which the groom is now demanding takes centre-stage at the reception.

“C’mon, it’ll only take ninety minutes… plus added time… and the pre-match build up… and fifteen minutes for half time… and if it’s a draw it could go to extra time and penalties… and then we’ve got to watch them lift the trophy”

Big sporting events like cup finals and world cups are scheduled well in advance, if there’s a chance it will clash with your big day and could lead to conflicts of interest consider moving the date. Whilst you cannot predict what teams will be playing, you’ll know when it is going to be played. If in doubt, move the date.

Groomzilla 3: Taking an Interest Too Late in the Day

Look, fellas, we’re all for you taking a bigger interest, but how about doing it straight off the bat rather than waiting until all the flower arrangements are in place and ordered before you suddenly declare: “the calla lilies just don’t have the same refined elegance as white roses”.

Double, triple, quadruple check they either want to have their say or they’re happy for you to go ahead and arrange stuff. If they insist they don’t mind, and proceed to moan at a later date, they won’t have a leg to stand on.

The DJ, the caterers, the bartenders, the wedding vendors, the photographers, whoever, they’re all here to help and make the day run smoothly, they’re professionals.

A sure-fire way to know if you have a full-blown Groomzilla on your hands is if they start being rude or nit-picky with the people you’ve employed or asked to help. Demanding that the DJ avoids playing certain songs, trying to get the wedding venue to move the hundred-year-old barn three inches to the left, telling the photographer he can only take photos from the left hand side (“Er, how Donald Trump are you?”)

Tell him not to stress over the minor details. These guys are professionals and have probably worked at hundreds of weddings. Let them do their jobs without interfering. Of course, choose your wedding playlist, pick where you want to have your photos, but don’t start making unreasonable demands or being outright rude.

Groomzilla 5: He Starts Interfering Too Heavily in the Bride’s Decisions

It’s the twenty-first century, men helping to choose things like the bride’s dress is absolutely fine. In fact, it’s better than fine, if you’re not going for the whole traditional wedding thing, why not have the groom come along and give his opinion. The issue is when his views stretch beyond the realms of offering his opinion and spills into telling you categorically exactly how it’s going to be because “He has the vision”.

Have a frank conversation from the outset about whether you want him to be involved in decisions such as your dress, your hair, your make up. If he is going to be involved, make sure you draw a line and make him understand whilst his opinion he can’t suddenly make every decision alone. And if he has so much vision how come he never notices when the dishwasher needs emptying!

Yep, the full Groomzilla, he literally takes over the entire wedding planning process. From the flower choices to the bridesmaid selection, to the font on the save the date invites, to your mother’s dress, the lot. He’s literally one minor wedding hiccup away from terrorising downtown Tokyo and having a full meltdown. It’s the complete bridezilla reversal.

Reiterate that it is both of your special day and this is something you should be doing together. Also, tell him to not get too hung up on the smaller details. Your wedding day is meant to be special, but it is just the first day of the rest of your lives together. Big picture, fella, now get off the side of that building and let’s go pick some place name cards!