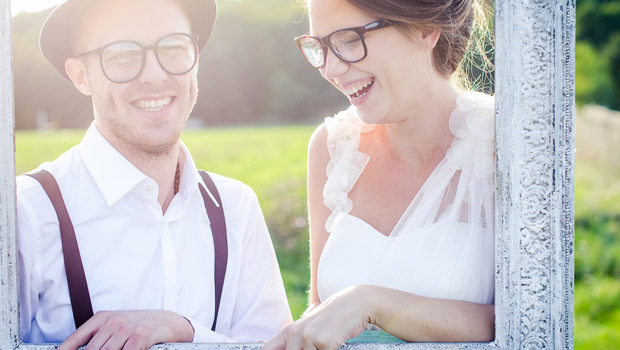 If you’re about to say I do then here’s a view from inside, the tender (!?!) moments couples share with the world about what life is really like once the confetti has blown away and the ‘…and they lived happily ever after…’ becomes more of a “…and she managed to make it through another day without burying him under the patio…”

Some of these tweets might seem cruel, some might seem unlikely and some might make you want you to add a few clauses into a pre-nup but one thing they all have in common is that they’re utterly hilarious!

It’s the little things in a marriage that really count, no, not the little love notes or surprise bouquet of flowers, but the evening you get sole ownership of the remote control or knowing he still hasn’t found your secret stash of Magnum’s in the freezer.

Someone drew doughnuts on the bottom of the grocery list

My wife thought it was cute so she bought them

She doesn’t need to know it was me pic.twitter.com/qmdoCc9sDO

Tell me again how I unloaded the dishwasher too loudly when you were watching golf. Detectives will want to know exactly how this went down.

95% of marriage is spent changing the temperature of the thermostat

When a child whines and cries, you give it back to the mama, so…

*hands husband back to my mother-in-law*

Me: A kid is crying.

Wife: It’s not one of ours.

Women who say getting married was the best day of their life have obviously never had 2 Kitkats fall out of a vending machine by mistake.

My wife got a Fitbit for the sole purpose of proving how many times I wake her up in the middle of the night by snoring.

I can start a fund for the zombie apocalypse

But if there are no zombies, I have to use it to send the kids to college

Keeping that special spark of romance is vitally important in keeping the joy in your marriage. Although keeping a sense of humour is possibly more important if you’re both going to make it through in one piece.

Know those adorable idiosyncrasies you loved when first dating? After 20 years of marriage they become what the police refer to as “motive”.

My husband just texted me from the bathroom and asked me to bring him “A LOT more toilet paper,” so yeah, the romance ain’t dead people.

Her: And set the timer! Im not eating burnt lasagna again!

Husband got excited thinking I was touching myself under the covers but I was actually just opening a Kit Kat I didn’t wanna share.

Ahh marriage. When you can be questioned for continuing to live.

My husband is home sick from work today and it’s like having one thousand babies.

If someone were ever to write a training manual for husbands (and someone really should!) then chapter one should be entitled “Knowing Who’s Boss”. Once that has been established marriage just becomes so much easier. Oh and just for the record (and any men reading this), it’s not the husband.

Relationship status: My wife asked me what I wanted for dinner and then told me I was wrong.

Marriage is mostly about knowing which hand towels you can use and which ones are for the better people who visit your wife’s home.

Without true love, marriage is just two people sharing a house staring at the same telly. And while this next set of tweets might not perfectly sum up what love is, they certainly strike an all too familiar chord for many spouses.

Marriage is essentially peeing with the door open and asking “What do you want for dinner?”

When my husband goes outside to investigate a strange noise, how long do I have to wait before un-pausing the show we were watching?

Relationship Status: Married long enough to know when I hear her say “I love you,” she’s talking to our dog.

Sorry. I was late because I had to find all the things that were in plain sight for my husband.

90% of being married is just shouting “what” from other rooms

All I want is for you to love me and let me put my cold feet on you. #nosocks #marriedpeopleissues

Marriage is essentially two people taking turns pushing down the top of the kitchen garbage so they don’t have to take it out.

I just googled, “how to get away with killing my husband” on @IMKristenBell phone. Just in case. Now there’s a record.

When it comes to sharing the jobs during your married life, to borrow a phrase, ‘It ain’t what you do it’s the way that you do it’. In the husband’s case it would appear the way he normally does things can be placed in a category marked as “Wrong”.

We’re assembling a crib from Ikea… Which option on their toll free number gets you a marriage counselor?

WIFE: you forgot to run the dishwasher again, didn’t you?

ME: [drinking milk from a flower vase] no, why?

When one door closes, another opens. Then another five doors plus two drawers open, and stay that way.
— My husband emptying the dishwasher

Him: You were supposed to do something about the groundhog under the deck.
Me: I did. I named him Lord Melbourne. He likes Cocoa Puffs.

99% of marriage is waiting in the car for your spouse.

There are two legal phrases that most people can quote fairly accurately;

• “…to have and to hold, from this day forward, for better, for worse, for richer, for poorer, in sickness and in health…”
• “… swear to tell the truth, whole truth and nothing but the truth…”

Thankfully for most married couples those two quotes aren’t taken from the same occasion.

you are so beautiful without makeup.

-my husband, after he saw i spent $62 on an eyeshadow.

wife: Why is your back all scratched up?
[flashback to me chasing a raccoon after she told me to leave it alone]
me: I’m having an affair