Everything from A to Z from GoHen, Lifestyle & Luxury

13 of the Most Instagrammable Places in Edinburgh 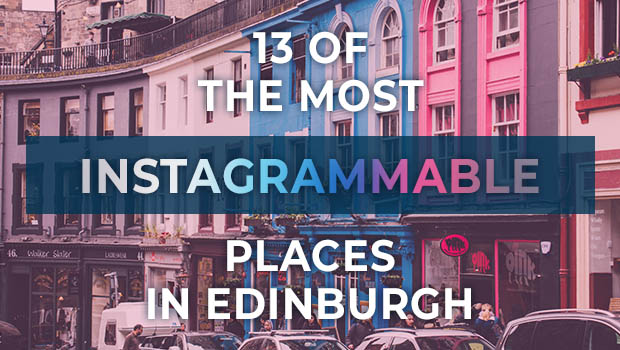 The stunning Scottish capital is an Instagram goldmine with loads of landmarks to snap and pose in front of as you tour the best Edinburgh sightseeing spots on your visit to this remarkable city.

Whether you’re popping in for the day or heading off on an Edinburgh hen weekend, touring Edinburgh’s attractions is a fun, free and fabulous way to spend an afternoon allowing you to stock up on sublime snaps to make the Insta world jealous.

Whether you trundle up the hill to its gates or you capture it from afar, Edinburgh’s most iconic spectacle will undoubtedly blow you and your followers away. Giving off Hogwarts vibes, it’s the city’s showpiece attraction which towers magnificently overhead, and nobody could ever get sick of seeing the sight of it.

How to find Edinburgh castle

Also known as ‘Edinburgh’s Acropolis’ and, OK, whilst not quite as impressive as its Athens counterpart, it’s still an excellent vantage point to come and take in the sights of the city – including the castle from a whole new perspective. It also features some stellar monuments as well as an observatory which make for remarkable photo opportunities in themselves.

How to find Calton Hill

A two-mile stroll from the centre of the city will take you atop of Arthur’s Seat where the views are, quite frankly, unrivalled. You’ll see the entire Scottish capital sprawl beneath you as you head up to snap those glorious panoramic shots to stop everyone in their scrolling tracks. It also happens to be a fantastic little walk.

How to find Arthur’s Seat

An alleyway to take you back in time with one of the best views of the castle in the city, the Vennel steps are a wonderful little walkway in the centre of town where you can snap some artsy shots en route up to the castle. There’s also a great little pub which you could pop into for a little refresher (we certainly wouldn’t blame you!).

How to find The Vennel Steps

The famous Royal Mile, aka the partying district, connects the castle to the base of Arthur’s Seat. Whilst not specifically a landmark, there are plenty of places along the thoroughfare where you can grab a great squad photo and get a bite to eat as you tour this splendid city (or even a glass of something suitably fizzy!).

How to find Royal Mile

A little oasis in the centre of the city, the Royal Botanic Garden is a peaceful haven where you can escape the high-energy atmosphere of the city centre and get back to nature in style. And, as we all know, the most photogenic person on the planet is Mother Nature herself, so you’re bound to unearth some spectacular shots as your stroll through the picture-perfect plant life.

7. Rooftop Terrace at the National Museum of Scotland

Whilst a poke around the museum itself is a great way to whittle away a couple of hours, it’s the stunning terrace we’re here to talk to you about, which offers impressive views out across the rooftops of Edinburgh (and, yes, that includes a great view of the castle, too!). A brilliant place to amble up and take this magnificent place in.

How to find the National Museum of Scotland

Containing Arthur’s Seat within its boundaries, there is plenty more to explore in the shadow of the dramatic step including a medieval ruin, some picturesque lochs, and some open expanses. Whilst it’s easy to get swept up in the electric atmosphere of the city centre, there is so much more to explore (and it’s all so so close). Push. The. Boundaries.

How to find Holyrood Park

This colourful curve of shops and eateries is not only a great place to have a little browse, but also a stunning photo opportunity. This is Edinburgh at its independent best and when the sunlight hits it just right, there are few better sights in the whole of the city.

How to find Victoria Street

An idyllic little village in the heart of the city, this tranquil little hamlet has a river running through it and used to be packed out with working mills. If you’re into your quaint British boltholes and calm country vibes, this is a must-visit on your trip to Edinburgh.

How to find Dean Village

Another stunning street (OK, lane!) which is another glimpse into Edinburgh’s picturesque past – take a stroll, snap some cute pics and use them in a collage to contrast with some of the bigger/more modern parts of the city.

How to find Circus Lane

You may have noticed by now, a lot of the Instagram spots all have the castle in the backdrop, but that’s because it is simply the focal point of the city. The fountain itself adds an extra element to the shot, and at night it’s particularly impressive when both iconic spots are simultaneously lit up.

How to find Ross Fountain

Slightly out from the centre of the city, the Forth Bridge is an impressive feat of engineering and is even listed as a UNESCO World Heritage Site. This impressive man-made structure evokes images of the Golden Gate Bridge (alright, maybe it isn’t quite in that bracket, but it’s still pretty impressive!) and we for one love it.

How to find Forth Bridge