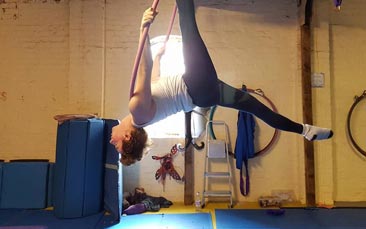 Fans of Britain's Got Talent will no doubt have noticed that aerial and circus performers are all just so bloomin' fit. Great six-packs, shapely bums, not a hint of a bingo wing. Jealous much? Yeah, we are. But now there's a chance to not only learn a brilliantly fun skill that really will have you all laughing for the whole session (and getting some great Instagram pics of the day), you'll also have one of the best workouts imaginable. You'll be aching in places you didn't know you had places.

Feel the burn, no pain, no gain sister.

The workshop lasts two hours, during that time you'll have a really intense warm-up then you can choose any three activities. And you'll be amazed how much you can learn in that time.

Cerceau
Sometimes called an aerial hoop, the cerceau is originally a French circus discipline involving a hoop on a wire that can be raised high into the air. You'll learn tricks, holds, poses, as well as working your core strength. Master this and it's the perfect piece of equipment to take incredible photos on.

Pole
Forget those shady old men in dingy clubs, pole dancing is a beautiful art form and now a competitive sport. You'll learn some amazing moves that yes, should you happen to have a pole in your bedroom could spice things up a little (although it does beg the question, why have you got a pole in your bedroom? Awks).

Acrobalance
Also known as adage, this is a partnership between two people using their bodies and strength to perform lifts, balances, turns and even flips (maybe not all in one lesson) as you flow between each move and pose. A stunningly beautiful discipline that interweaves circus skills with dance (think Strictly on steroids).

Silks
This ancient circus art is quite simply breath-taking. Often used in high profile events, product launches and catwalks it involves performing using long 'silks' suspended from the ceiling. The performer climbs the silk using a combination of strength and by wrapping the silks around limbs, feet, hands, etc. This really will work that six pack.

Straps
On first appearance, the straps look like something you might expect to find an Olympic gymnast training on. Two straps are suspended up high, seasoned performers will create amazing shapes and poses on the straps while being lifted and then flown through the air. Thankfully you'll start with the basics. No flying today.

Trustpilot
"...absolute cracker of an activity!..."

"This is an absolute cracker of an activity! Everyone had so much fun that they are considering lessons!"

Please Note: We work with 1000s of suppliers across the UK & Europe so prices, availability, photos and specifics on our aerial circus skills activity may vary depending on your preferred location and dates.