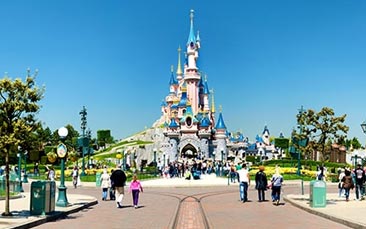 "When you wish upon a star..." Yep, the perfect princess is finally marrying the fella of her dreams and heading towards her happily ever after, so why not give her a fantasy send-off.

This really is the magic kingdom where you can spend the day regressing to your childhoods, laughing and living life like the kids you were and sometimes still are!

You'll also have access to all the shows, parades and live entertainment throughout this massive wonderland. But make sure you stick together, while it might be a "small world after all" it's a bloomin' big park and very easy to lose track of each other on busy days.

But in case that isn't enough... You'll also get entry to Walt Disney Studios Park! This is for the big kids and you'll find faster-paced rides and entertainment including:

Walt Disney Studios Park is perhaps the older teenage brother to Disneyland's wide-eyed innocence. The rides are tougher, faster and the shows tend to have a bit more of a rock 'n' roll edge. There is also much more attention to the world of making movies and some of the classic teen movies the Disney studios have created over the years.

On your Disneyland hen party, you're guaranteed plenty of giggles as you rekindle your love for all things fun, animated and 'happily ever after'.

Please Note: We work with 1000s of suppliers across the UK & Europe so prices, availability, photos and specifics on our disneyland paris activity may vary depending on your preferred location and dates.